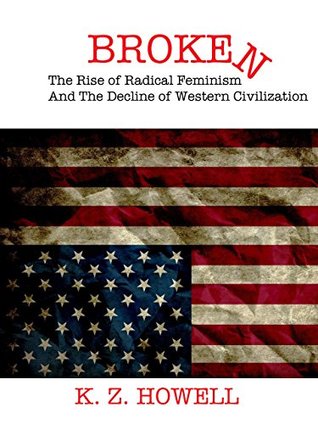 Broken: The Rise Of Radical Feminism And The Decline Of Western Civilization

A brief history and explanation of the radical feminist movement in America. Covering the movement and its deliberate undermining of Western culture and values from the late 19th century till modern day, BROKEN chronicles the greatest political hoax ever perpetrated against democracy. Stemming from the earliest socialist movements of American labor, the Women movement was seen as the perfect vehicle to infiltrate the hardcore socialist ideals into the greatest enemy totalitarianism has ever encountered, the American republic. BROKEN carries the reader step by devious step through the early Suffrage movement, through the takeover of the womens movement by hardcore socialists in the 1920's and the radical agenda of the Second and Third wave feminists.
BROKEN lays out the anti-Western agenda and the deceptive tactics of the Progressive Socialist insurgency that threatens to bring American liberty and the Western way of life to its knees. From the willful destruction of marriage, family and the economic warfare radical feminism has waged for nearly 90 years, BROKEN gives you the vital information you need to resist the movements designs and recognize the danger that the unholy alliance of Feminism, Socialism and Islamism represents to Western society.